7 days ago, I mentioned that Augur's github was showing signs that it would launch soon....Last night we received confirmation!


Augur’s contracts will be deployed to the main Ethereum network and the REP migration will begin on July 9th, 2018 at 11:01AM PST.

The deployment process will involve conversion of all existing ERC20 REP tokens to a new Augur specific contract. This contract has been heavily reviewed, and significant bug bounties are still available to incentivize the community to find issues prior to launch. Many in the open source community echo Joey's sentiment.

Through out the Consensus 2018 conference there was conversation on the difficulty of bringing off chain data into the blockchain, Augur's upcoming launch will represent one possible solution to this problem. Effectively hodlers of REP are incentivized to stake their tokens on real world outcomes, there by informing the blockchain of what has actually transpired off chain. Markets where there is no clear outcome are promoted to a new level in "the courts of Augur"... where additional market participants are enlisted to provide their own opinions of what transpired off chain. Eventually one version of the off chain event, will be preferred by the majority of REP hodlers, and that version will be "baked into the chain".

Over the coming month, I anticipate building excitement through Augur's launch. The REP token market is generally not a top 20 volume market, but with the addition of REP to Binance I expect things are changing. The fact that REP was added to Binance means Binance believes this token will capture a significant fraction of the communities mind share. I believe we are about to or are entering the Media Attention phase of the graph below. 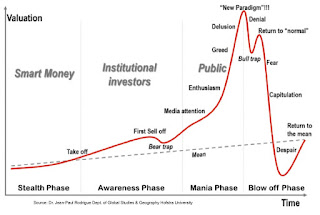 At the moment REP is rank 37 on coinmarketcap.com. It is valued at $58.50 up from ~$50.50 prior to the announcement. I believe that Augur stands a chance of being the "killer app" for Ethereum. If this is the case, it could easily justify a much higher market cap ranking vs other ETH tokens than its current rank 10 with market cap of $643M. Assuming rank 3 is achieved relative to other ETH tokens, a market cap over $2.3B could be achieved. This would represent a gain in excess of 350% relative to ETH. If we assume ETH continues to perform well, the gain in USD could be significantly more.

Time will tell if Augur proves to be a killer ETH app, and REP's token appreciates.

Disclosure: I am very long REP because I believe: